With the reactivation of international cruise ships in Spain from 7 June 2021, the forecast of cruise ship calls in the Port of the Bay of Cadiz is published. We inform you that this forecast is subject to daily modifications. 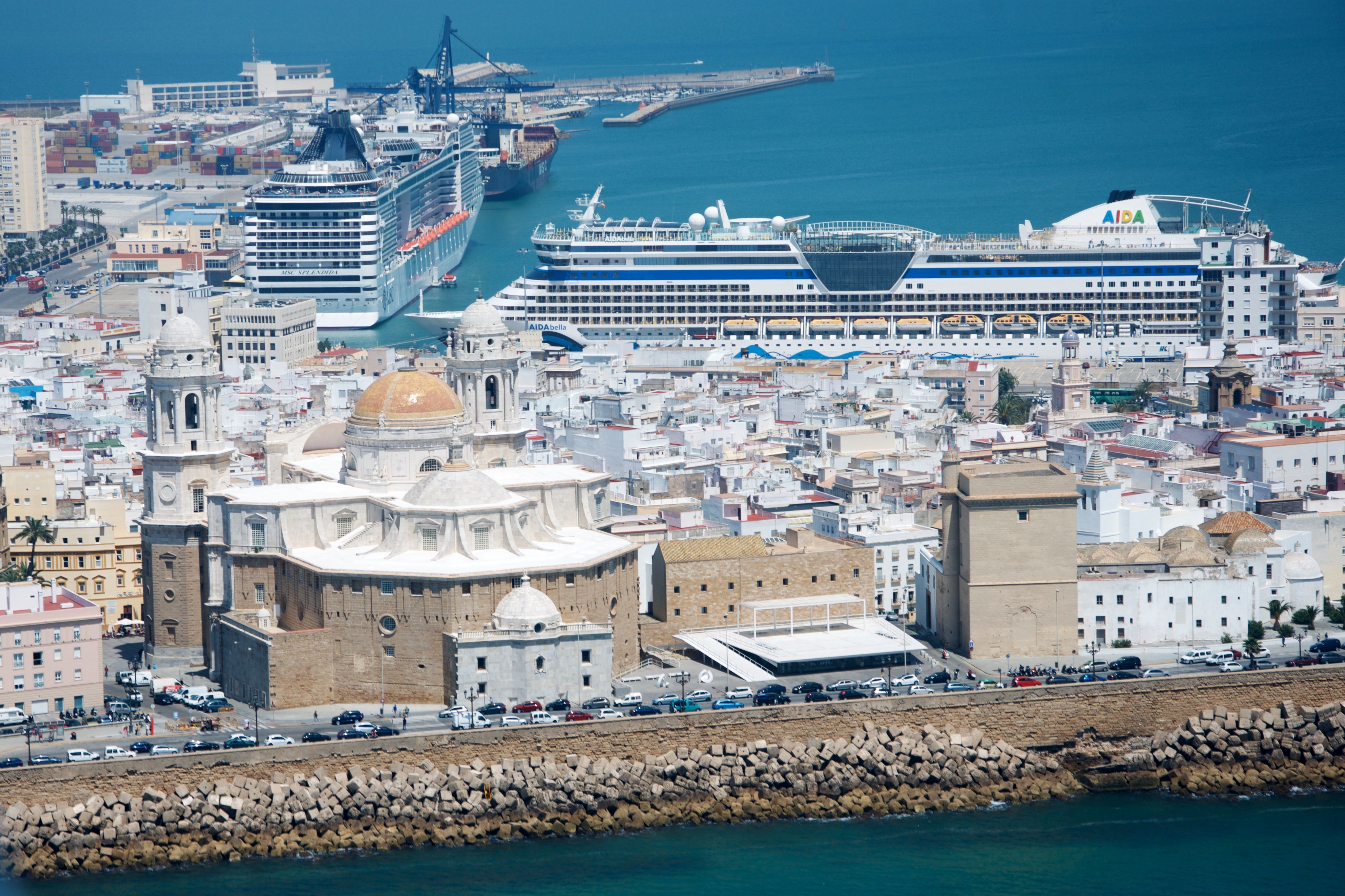 The Bay of Cadiz Port is located in the surface area Mediterranean-front Atlantic, close of the strait of Gibraltar, with a privileged geographical situation between the Atlantic and the North of Africa for what camer being a regular port of call for cruise vessels yearly in its transfer between the Mediterranean and the Caribbeean and vice versa.

But not only for their geographical situation is Cadiz an elected destination for that ships, but rather the city, their country and the vicinity to other tourist centers in Andalucia have wakened up the interest for several companies that have included Cadiz like habitual scale at their cruises in the Mediterranean, making night in our port, because the fun possibilities that the city and its environment offer it is so wide and varied that is extremely attractive for the visitors.

The relationship between Cadiz and the sea has always been special. The fenicians navigators founded it 3.000 years ago, they received their splendor for the ocean after the discovery of America and this identification with the sea t is also manifested in the artists, in the parties, in the gastronomy and in all the facets of the life.

Disembark in Cadiz means to enter in a city with 3.000 years of history, Cadiz, the most ancient city in the West, with a hospital and open character; a monument in itself.

In the trade there are magnificent reproductions of the archaeological discoveries and more emblematic areas of the city; paintings, engravings, miniatures, hand-operated realized dolis, handmade jeweler’s and fashion in dressing, shoes and skin acticles. You can pay with credit card.

In addition, the province has a tourist offer that is difficult to beat (top quality golf couses1, the route of the white villages, the Jerez and Bajo Guadalquivir areas and the beaches on the Cadiz coastline, to know the Moorish towns, the art of the Carthusian horses, the flamenco and the brave bull, the seafaring towns as well as the essence of the sherry wine or the white towns), and where the visitor can find high quality services of renowned prestige. Next, there are a lot of trips that fulfil all the above:

The catehedrals of the wine

Harold Lloyd, Liz Taylor, Wool Turner, Orson Wells or Steven Spielberg has come closer until Jerez to Know its cellars, attracted by the prestige of its wines and the historical elegance of the buildings. The visit finishes in all them with a tasting. The cellars are just to half hour from their cruise. it you are in the Bay of Cadiz Port, visit them.

The art of the horses

If you have not seen dance the Carthusian horses, you shpuldn´t lose the occassion ). Visit Jerez and the Real Andalusian Equestrian Art School. The Real School is devoted to the formation of horsemen and to the breeding and improvement of the Carthusian race horses, one of the most beautiful horses in the world. Besides of, they offer its show “How they dance the Andalusian horses.”

The brave bull is so near to your cruise that neither you imagine it. It is very tempting to contemplate them in the field and in an amateur bullfight from the barrier. You can know how the is day by day in an Andaludian farm, to enjoy with a lunch and to take advantage of the opportunity to appreciate how they are raised and they are selected.

The route gives the white towns

Under this denomination we refer to an itinerary that begins in Arcos de la Frontera and it lapses for ubrique, Grazalema, Zahara de la Sierra and Setenil, among other towns. Some towns so white as different, so much that if Arcos distribute their houses in the high thing of a rock, Setenil take a whole mountain for roof. The architectural show doesn’t leave impassive to anybody. As much in Grazalema as in Ubrique you can visit one another handmade centers and to buy blankets and skin articles.

For the Moorish path: Medina and Vejer

Visit Medina Sidonia and Vejer de la Frontera is to go for a walk among the purest style of the Andalusian Arab architecture. Narrow streets, small squares, walls and castellations reveal their very old origin; both towns, declared artistic historical groups allow to combine the visits guided with the purchases of artisans products, especially cermic in Vejer and sweets in Medina, since this city was the confectioner capital of th Arab world. One of the illustrious vivitors of Vejer was J.F. Kennedy who visited the town in 1954.

From green to green

From the blue to the green: the Bay of Cadiz Port offers he possibility to navigate and to give the best blow. It takes just twenty minutes from your vessel to arrive to international prestige golf. headquaraters of tournaments like the Volvo Masters and in 1997 the Ryder Cup. Numerous fields wait you to play where the best play.

The sailors give the Atlantic

No more than half hour to the north of the capital of the province is located El Puerto de Santa Maria and then Sanlúcar de Barrameda, ideal towns for those that want to taste the most exquisite seafaring kitchen, to know its castles and palaces and its famous cellars, located in front of the National Park of Doñana.

Other emblematic cities in Andalusia and with much tourist tradition as Seville, Ronda or Cordoba. All of them can be visited from our port.

The usual berthing point for the cruises vessels is integrated in the urban centre of the city. The distance from the passanger terminal to the neuralgic city centre is hardly 5 minutes walking.

These are some services that the Port of Cadiz Bay offers to all the ships that berth in its quays:

The cruise terminal situated alongside Alfonso XIII pier, offers cruise passengers a safe and comfortable welcome to Cadiz. After recent expansion it offers 1300 m2 in which you can find an open-plan hall with check-in desks, disembarkation area, luggage storage area, tourist information desks where passengers can obtain maps of the city, free Wi-Fi zone, delicatessen and souvenir shops among other services. 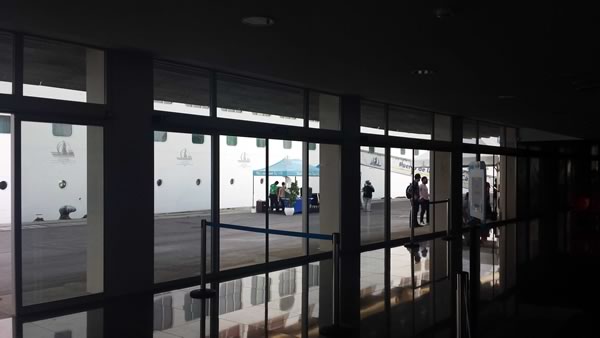 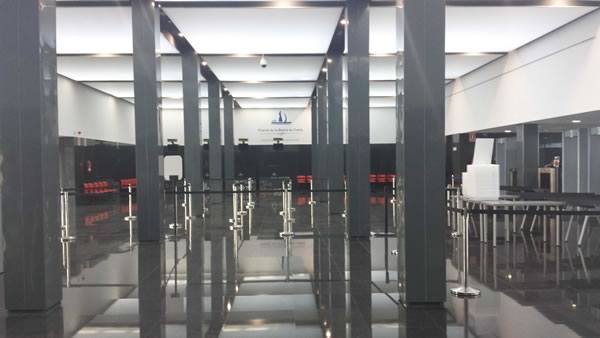 Accesses are controlled by security staff working alongside state security forces: civil guard, border police as well as the port police. The port installations comply with the ISPS code and European legislation. This specific additional security is highly valued by the shipping companies.

The port has a large parking area, adjacent to the terminal, for organized tours with capacity for more than 16 buses.

The city center is only five minutes walk from the cruise terminal, offering a wide variety of restaurants, shops, boutiques, monuments and museums. Outside the terminal you can find a taxi rank and close by the local tourist busses. 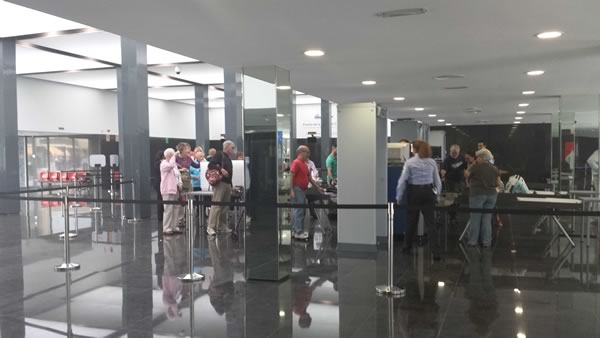 There is another CRUISE TERMINAL located in the Ciudad Pier that receives the ships of cruise that dock in this pier. This infrastructure receives the cruise passengers in a comfortable way, with direct access to the city through the Paseo de Canalejas and the Plaza de San Juan de Dios. The terminal has an area of 420 square meters and like the one located on the Alfonso XIII pier has free wi-fi connection.

This brochure has been edited by Andalusian Tourism Office and Suncruise Andalucia Asociation. Its aim is to promote the port, the city and the province between the main companies and tour operators.

Regulation (EU) 1177/2010 establishes the rights of passengers travelling by sea and by waterways, these rights include unbiased treatment and free assistance to individuals with handicaps or reduced mobility, financial compensation for lost or damaged mobility equipment, and passenger information and compensation or assistance in case of cancellation or delay.

Summary of provisions concerning the rights of passengers when travelling by sea and inland waterway.

Summary of provisions concerning the rights of passengers
206.26 KB

At Reina Victoria pier in Cadiz-City Basin, there is a metropolitan maritime station from Cádiz, that attends to the passengers between Cádiz, El Puerto de Santa María and Rota, with modern catamarans. It has it access from Sevilla square and it is five minutes walking from the center of the city. 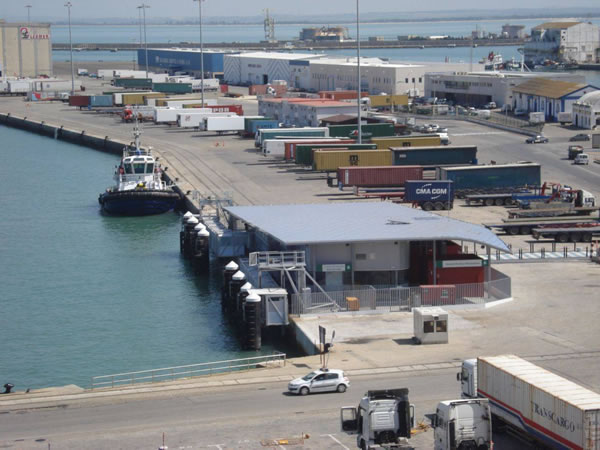