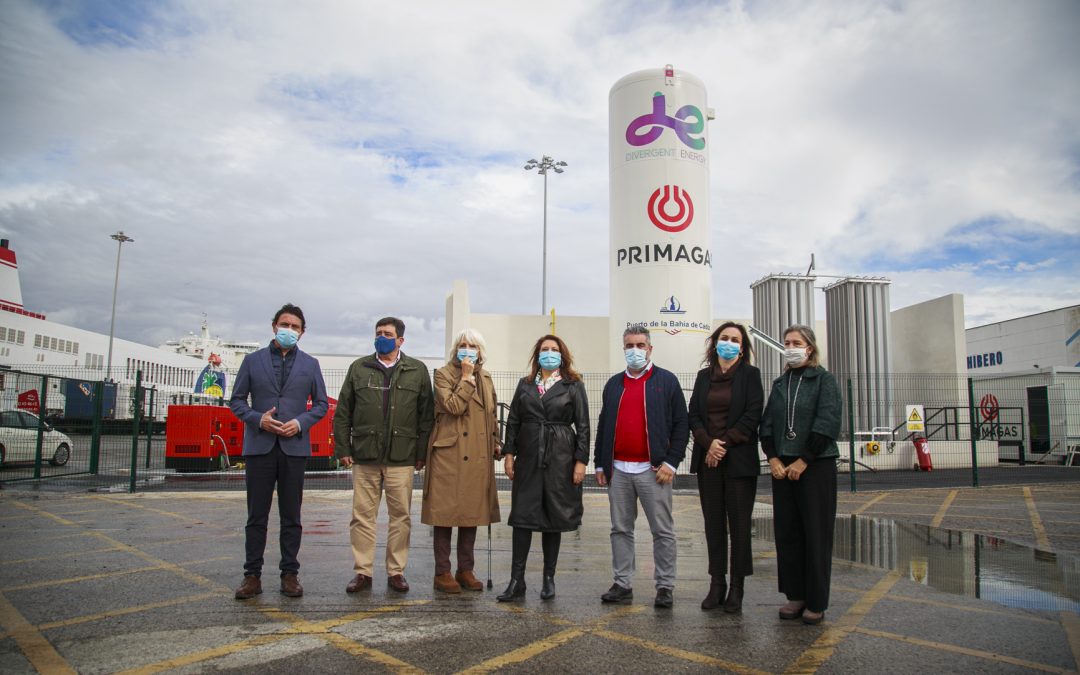 Cadiz, 27th November 2020 – The Port of Cadiz, Divergent Energy and Primagas (a subsidiary of SHV Energy) have joined forces to implement a pioneering energy solution in the Spanish port system which will represent a significant advance in the reduction of the carbon footprint of these installations. This project generates electricity from a low carbon fuel such as liquefied natural gas (LNG) in the facilities of the Port of Cadiz Bay, specifically for the refrigerated trucks that remain in the Marqués de Comillas quay in the commercial dock while waiting for transit to other ports.
The initiative enables progress to be made towards the energy transition of the Port, thanks to the reduction of nitrogen oxide (NOx) emissions by 90% and of CO2 by 60%. In particular, it is planned to eliminate between 1 993.61 and 2 492.02 kilograms of CO2 per day as well as eliminating completely the emissions of sulphur oxides (SOx) and particles (PM). The measure will also reduce the impact of noise pollution on these facilities.
Currently, there is a weekly traffic of more than 600 refrigerated trucks that have to wait for their shipments for up to 72 hours with diesel engines running to keep the goods cold. The main users of this service will be three of the most important logistics operators in the Port of Cadiz: Grupo Mazo, Trasmediterránea Logística and Acotral.
The technique used consists of creating an electrical network without the need to carry cables from a transformation centre, as electrical energy is generated through the liquid natural gas supplied by Primagas. This is a very beneficial value proposition for the ports because it is not necessary to make a large investment or to paralyse the activity in order to carry out deeper works.

The Regional Minister of Agriculture, Livestock, Fisheries and Sustainable Development of the Andalusian Regional Government, Carmen Crespo, highlighted the value of the project during a visit to the facilities yesterday, in which she encouraged the promoters to promote it “in the other ports of the Andalusian Community and the rest of the country”.
For his part, the CEO of Primagas, Per Nielsen, stressed that “this project is another step in Primagas’ commitment to the energy transition. We will make a key contribution to the electrification of Spanish ports, thanks to the supply of a more sustainable energy source such as LNG”.
Daniel Moreno, CEO of Divergent, assures that “our mission is to generate patented ideas from which new business models can emerge. Energy generation is a key factor in the emission of greenhouse gases and we are convinced that we can continue to consume energy without exploiting the planet by using our imagination, as is the case with this project”. “Europe has more than 1,200 commercial ports and having a patent for the next 20 years like the one we are presenting now is a great milestone that shows us the way forward in other places”, he adds.
For her part, Teófila Martínez, President of the Bay of Cadiz Port Authority, considers that “the electrification of the ports is an unavoidable objective in the system and a priority for the specific case of the Bay of Cadiz Port, which has made a strategic commitment to sustainability and digitalisation”.

About the Port of Cadiz
The Port of the Bay of Cadiz has five docks, located in three different towns and specialized for traffic, being able to attend to any type of traffic. In 2019, it moved 4.4 million tonnes of port traffic, standing out in fresh fishing and cruises, where it occupies fourth and fifth place at state level. Environmental sustainability, together with digitalization and the search for new lines of business, are three priority strategic objectives to face the future with guarantees for the Port Authority of the Bay of Cadiz.
About Divergent
Divergent Energy is an Andalusian company dedicated to technological development for the improvement of the environment, where its greatest virtue is to listen and observe and then execute unprecedented solutions with registrations and patents.

About Primagas
Primagas, a subsidiary of the SHV Energy group, world leader in LPG, has been operating in Spain for 22 years with the clear mission of improving living conditions in areas that are outside the conventional gas network, making an efficient and clean energy solution accessible to everyone.
Every day, Primagas supplies LPG, LNG and biopropane wherever its customers need it, even in the most remote places. The company is involved in the energy transition so that people living in non-urban areas have access to cleaner energy.
In order to guarantee the supply and installation throughout the country, Primagas collaborates with a network of more than a hundred installation companies that allows it to offer its service immediately, quickly and anywhere in the country.

About SHV Energy
SHV Energy is the largest LPG distributor in the world and supplies LNG and biopropane to consumers and companies that do not have access to the grid. These cleaner energy sources help society to move away from oil and conventional fuels, improving the quality of life and the quality of the environment. The company serves the needs of over 30 million customers and is committed to working in a sustainable way with communities, stakeholders and policy makers. SHV Energy operates in more than 25 countries in four continents under brands such as Calor Gas, Ipragaz, Liquigas, Primagaz and Supergasbras, among others.