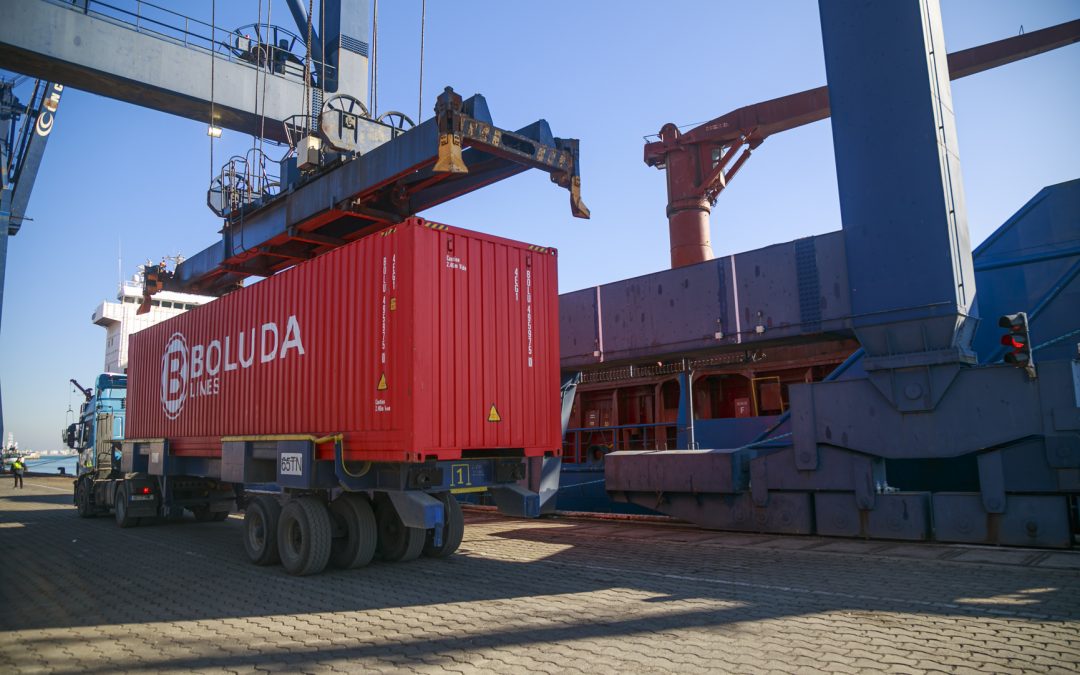 Wednesday, 13 January 2021. The Port of Cadiz Bay has closed 2020 with 4,445,600 tonnes, 0.05 per cent more than in 2019, despite the fact that the pandemic has caused a general decline in the movement of goods on an international level and that, up to November (last data available), in the ports of general interest of the State, there was an average decrease of 9.29 per cent.
If we look at traffic according to the form of presentation of the goods, the behaviour of general merchandise stands out, increasing by 42% with respect to 2019, leading, moreover, the growth of this group at State level. In total, 1.6 million tonnes of general merchandise were moved, half a million tonnes more than the previous year.
This increase was also reflected in container traffic (lolo), which ended the year with 377 per cent more tonnes than in 2019, at 732,636. In 2020, Teus grew by 251 per cent (74,689) and units by 183 per cent (43,043). This increase is explained, as we know, by the launch of new lines of this traffic during the past year.
The volume of liquid bulks remained practically the same as in 2019, at 1,271 million tonnes, compared to 1,331 million tonnes in the previous year. However, solid bulk was down 22% on last year, at 1.44 million tonnes, compared to 1.859 million tonnes in 2019.
In short, total goods traffic (solid and liquid bulk and general merchandise) reached 4.360 million tonnes in the Port of Cadiz Bay in 2020, an increase of 0.43% over the previous year.

Despite the pandemic, which has affected the movement of goods in the ports, the Bay of Cadiz manages to close the year in positive with a volume of traffic similar to 2019

Fresh fish, on the other hand, fell by 11.95 per cent, with 14,016 tons of fresh fish auctioned in the Bay’s fishing facilities, which reached a sales value of 44.085 million euros, 3.73 per cent less than in 2019.
However, if we differentiate between the activity in fish markets (Cadiz and El Puerto de Santa Maria) and the wholesale market of El Puerto, the latter increased by 4% the volume of fish sold (5,348 tons), while the wholesale markets decreased overall by 19.58% and moved 8,668 tons.

Road traffic, on the other hand, recorded a 10.87 per cent drop in the year, with 765,024 tons moved.
On the other hand, cruise ship traffic closes 2020 with a drop of 92 per cent in both stopovers and passengers, maintaining the 24 stopovers and 40,690 passengers that arrived before the pandemic was declared and, with it, the prohibition of docking these types of vessels at the national level.
Finally, with regard to the volume of traffic moved by each dock, it should be noted that although Cabezuela-Puerto Real continues to lead the way, with 58% of the total volume of goods moved in the Bay, it is losing weight in favour of the commercial dock in Cadiz, which increased its volume from 24% to 35% of the total in 2020.
Looking ahead to 2021, the Cadiz Bay Port Authority hopes to maintain the upward line in general goods traffic, with the maintenance of the new lines and a greater impact of the Boluda line with the Canary Islands, which has already been noticed in 2020 despite having started at the end of the year. It is also expected that the evolution of the pandemic will enable the volume of bulk cargo to be recovered.