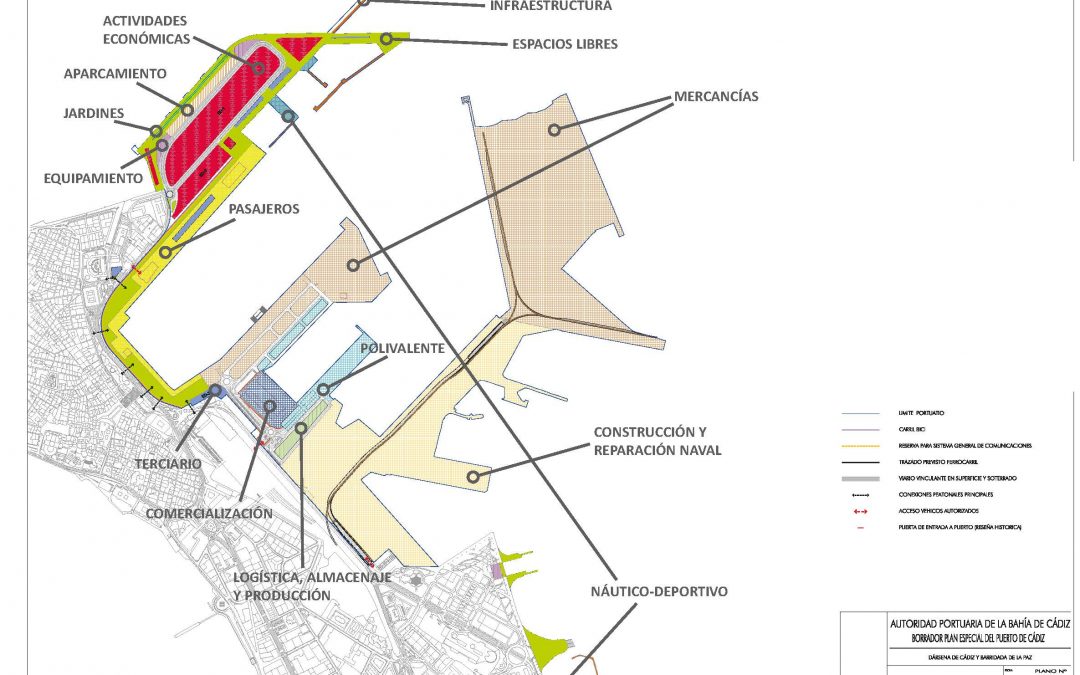 The Board of Directors of the Port Authority of the Bay of Cadiz (APBC) has approved today the initial formulation of the Special Plan for the Port of Cadiz in the municipality of Cadiz.

The document guarantees and safeguards the space destined to the net port activity, which amounts to 1 million square meters, at the same time that it proposes 335,000 square meters for the relationship of the port with the city. As explained by the president of the Port Authority of the Bay of Cadiz, Teófila Martínez, the objectives of the Special Plan respond to general criteria and determinations that have arisen in the meetings held between the port body and Cadiz City Council, the planning documents and the port-city strategy analysed, and on which work has been carried out over the last 3 years.

The Special Plan is the instrument for the urban planning of the port, designed to articulate the coordination between the administrations with competence over the port space, the general plans and other general instruments of urban planning.

It includes the necessary measures and forecasts to guarantee an efficient exploitation of the port space, its development and its connection with the general land transport systems.

The first Special Plan for the Port of Cadiz was definitively approved by the Cadiz City Council on 5 November 2004 in development of the PGOU 95. It was published in the BOP on 12 February 2005.

As the President has highlighted, the reality of the port has changed since then. The port has completed its strategy of reorganizing the traffic by docks and has executed the new container terminal, which will allow new uses related to the relationship of the port in the city in the esplanade of the current terminal.

All this has made it necessary to draw up a new Special Plan, so that the integration of these lands, within one or two years, can be faster and more effective and also guarantee the preservation of port activity.

In this sense, Martinez has highlighted that through the Special Plan the spaces destined to the port activity are guaranteed, located in

Likewise, the Special Plan proposes an area of 335,000 square meters destined to house activities included in the port-city relationship, mainly based on cruise traffic, through the Reina Sofía, Alfonso XIII, Ciudad and Reina Victoria docks, complemented with the development of complementary activities, both port and nonport, in its esplanades.
In addition, the spaces destined to the sport nautical with the facilities of Puerto America and the Real Club Nautico de Cádiz are maintained, improving their integration in the urban network. The Paseo Almirante Pascual Pery has been completed, making it a fully pedestrianised area for public entertainment.
According to the president, 45 percent of this space, 149,000 square meters, is devoted to open spaces, gardens and roads, to which must be added another 34,000 square meters of open space in the tablets with building capacity.

Teófila Martínez has also emphasized the environmental measures included in the Special Plan, which will promote the use of renewable and clean energy, and will encourage efficiency, defining specific programs for intelligent energy saving in the new facilities and buildings to be designed.

The new plan is formulated by the Port Authority and approved by the regional administration, following a report from Puertos del Estado.