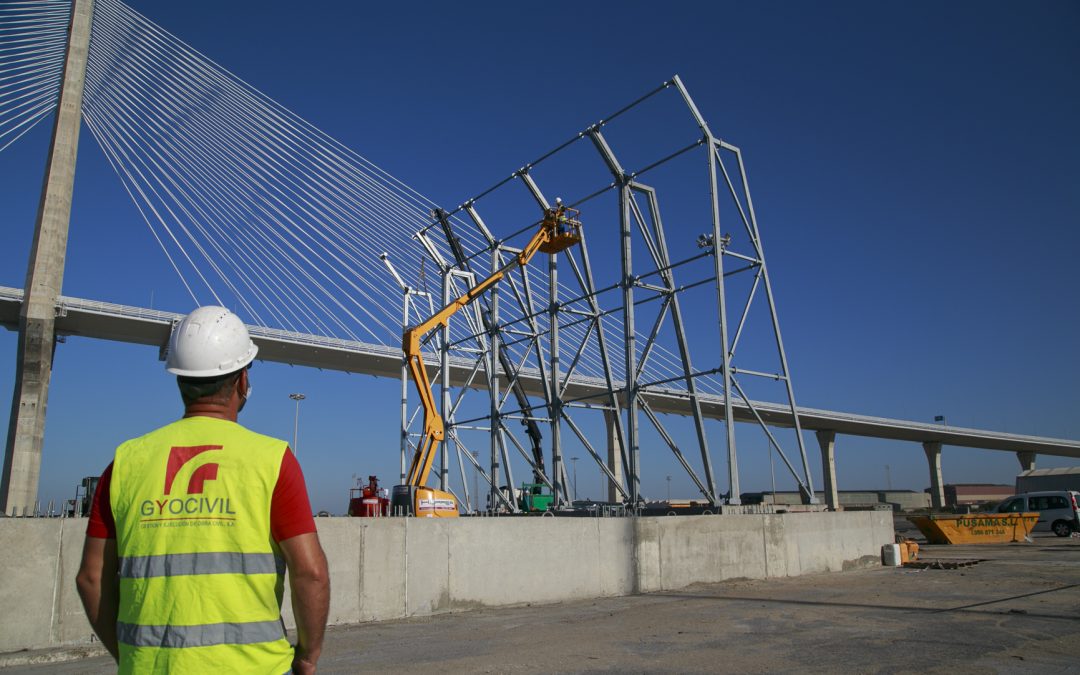 Wednesday, 25 November 2020. The implementation of the new environmental measures to improve the sustainability of the La Cabezuela-Puerto Real dock during the handling and storage of bulk cargo will be completed by the end of February.

As is known, the project has several measures, of which the main intervention is the installation of new protective screens during bulk handling tasks in the loading and unloading of ships with a more efficient design that limits the spread of suspended dust. The protected area will have 233 linear metres and the height of the screens will be 14 metres.

The foundations of the screens have been completely built, while the metal structure that will support the textile barrier is currently being manufactured and assembled, which is expected to be completed in December. Once the entire structure has been assembled, a special protective mesh will be installed (similar to the one used by Navantia Cádiz at its facilities), which is expected to be ready in January.

The project, which also includes the paving of an area of the quay, among other measures, will be completed in February

The screens are being placed 72 metres from the cliff with a bracketed alignment ([). The barrier is made up of 58 screen modules of 4 metres in length, of which 42 are located parallel to the quay and 16, perpendicular to it, in two alignments of 8 modules each. The upper part has a 42º slope to improve its efficiency.

In addition, four mobile water spraying cannons will be installed, in order to complement the protection of certain bulk handling positions and to perfect the protective action of the barriers in certain

weather conditions. Cannons can be arranged in 6 different locations.

Water and electricity services for these canyons are also underway and are expected to be completed in December, as is the wind detection warning system that triggers the sprayer.

Finally, the paving planned for the area to prevent the accumulation of material in cavities and to facilitate the cleaning of the docks will be carried out in two phases, the first of which will begin next week.

With the aim of maximising the organisation of heavy vehicle traffic and more efficiently controlling the cleanliness of the areas where these vehicles circulate, the signposting of the roads connecting the port’s interior will also be improved, mainly between the loading and unloading area and the port access.

The Port Authority has also recently set up an Environmental Management System that will make it possible to control and improve emissions in Cabezuela, among other objectives, and thanks also to the installation of two state-of-the-art measuring stations in collaboration with the Andalusian Regional Government, it will be able to control the effectiveness of the environmental improvements implemented, as well as knowing in detail the emissions in both areas in real time and continuing to take measures to improve the sustainability of the port.

In this sense, the results of the measurements on the efficiency of the measures once they have been put in place will lead the Port Authority to reinforce the investments if necessary in order to achieve the least impact of the activity on the environment.

In fact, in a second phase, the APBC plans to make an investment effort to improve the paving of the rest of the quay and to level out the railway access road, by the time the railway is operational in Cabezuela, which will also result in the environmental improvement of the dock.